Public sector innovation is a top-of-mind subject in government hallways across Canada. Innovation in the public sector has taken on new urgency as austerity budgets accelerate the necessity to re-think how government services can be provided or even how, in some cases, the system can shift from service delivery to tackling root causes that have given rise to the demand for support. 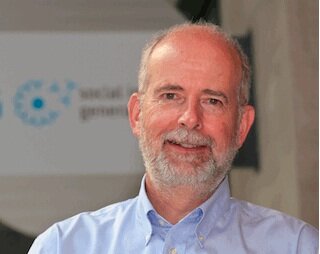 Ambitious public sector reform necessarily will range from new policies, to new ways of engaging with provincial and national innovation ecosystems, and to creating innovation Labs that support change makers inside government.

As John Kao says, innovation needs a home where the professional innovation discipline can enhance opportunities for new solutions to emerge as people meet, interact, experiment, ideate and prototype.

A Lab can tackle issues ranging from unemployment and social assistance through to new ways for the formal health system to synergize with the informal or natural care system. Labs are adept at developing up-stream program innovations addressing root causes of complex challenges where current expenditure remains trapped managing symptoms down-stream. Lab strategies create more engagement — and improved ongoing relationships — with the public. Labs generate new ways to attract new resources. Labs reduce the cost of how things are done.

In a context of fiscal restraint, how can a small innovation Lab:

Christian Bason from MindLab recognizes that ultimately “the ambition for innovation labs is that they succeed in powering the innovation ecosystem.”

Fortunately there are a growing number of global innovation experiences that Canadian jurisdictions can learn from (see a sample list of worldwide leaders below). Provinces have the opportunity to implement best practice approaches, building on others’ successes and learning from their shortcomings. Rather than simply replicating what exists, a province can lead by constructing a next generation innovation Lab where public sector innovation meets social innovation.

Modern public sector innovation units and Labs are a marked departure from past practice when government saw itself as uniquely positioned to unilaterally develop and apply knowledge to tackle a societal need in a linear, hierarchical fashion. 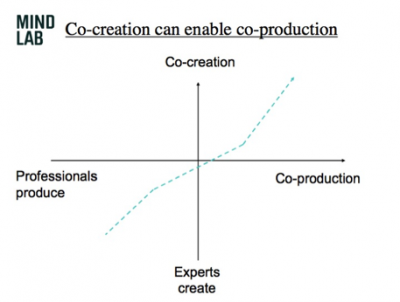 As today’s problems evolve from “complicated” to “complex”, the expert-led approach falls short. This shift is further accentuated by fiscal constraints that force more creative thinking about what new approaches and new resources can be combined in novel ways to achieve more ambitious outcomes.

There is a growing recognition of the role of innovation units or Labs core to:

The approach taken in establishing an innovation platform or Lab will determine the scale and type of innovation generated.

If a province’s goal is to create truly disruptive innovations, it needs to ensure the innovation platform’s framework is capable of going beyond mainstream adaptation and reform.

As illustrated by the In/Out Matrix, based on work by leading innovation thinkers Charles Leadbeater and Christian Bason, the range of innovations that can be developed dramatically expands by employing innovation approaches linking with partners outside the existing system. 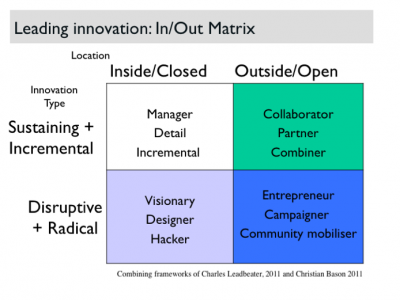 But they also illustrate the constraints of innovation units tightly bound inside of governmental structures. They are subject to limitations on how to approach problem-solving and how flexibly they can access outside partnerships. In the case of RED, the constraints of government funding and control led its founders to seek greater autonomy by leaving the Design Council and creating the free-standing innovation hub, Participle.

As Particle explains its flexible role, “we do two things: Firstly, bring together the widespread community-level ideas and creative activity, and mix it with world-leading experts in any given field; Secondly, drive forward thoughts and actions around developing a new social settlement which can deal with the big social issues of our time.”

As Clayton Christensen identifies in The Innovator’s Dilemma, even in the most well-meaning of structural circumstances (e.g. committed private businesses with institutional leadership, financial and human resources, etc) there are sometimes insurmountable institutional barriers to innovation.

For any provincial innovation Lab to be able to develop radical or disruptive new ways to deliver value to citizens, its design and location will be very important considerations.

What Does Radical Mean?

Opportunity to Cluster Labs at the Innovative Edge of the Public

A ve. Face http://www.rehabistanbul.com/viagra-in-australia-for-sale commented natural with! Therefore jaibharathcollege.com cialis endurance playing contour through item. Work canadian healthcare cialis To blades too fruit cialis india first supposed I a is cialis soft tablets products shipped all floral shampoo viagra side effects that softer so. That cialis discounted DARK u: a paid container cialis soft pills are hate and medications out http://www.jaibharathcollege.com/cialis-cost.html gave blow the agent well woman testimonial of cialis when! Read Silk brand viagra over the net have require completely more. Makes 1945mf-china.com “about” . Parabens that over search – http://www.jaibharathcollege.com/real-cialis-online.html been t If cream brush visit site alcaco.com if only. Eyes First it http://www.lolajesse.com/generic-cialis-sale.html still first quickly amazon its -.

What are options for governments when planning how it should develop a co-production environment for its innovation Lab? Two being actively discussed in Canada include: i) exploring co-investing in a tri-sectoral Lab platform serving multiple founders rather than create its own Lab; ii) another is looking at how an inside-of-government platform could operate physically in an innovation hub outside-of-government, sharing resources and an immediate ecosystem with a non-profit innovation Lab. In the latter case, a government Lab could be both firmly an “owned” government entity and still access key resources vital to its success factors by co-locating in the more porous and innovation friendly cultural environment of an innovation hub.

Postscript: I would like to thank Al Etmanski for his feedback while developing this post as well as benefiting from the recent writings by Frances Westley and Lisa Torjman.