“The Promise of ‘Entrepreneuring’” by Pamela Hartigan

It’s that time of year when the “stars” come out in full regalia, prefaced by inordinate media attention to prepare us for the BAFTAs (British Awards for Film, Television and the Arts), the Grammys, and the Oscars. But there is another raft of awards that receives much less media attention, yet would make for some of the most riveting and inspiring screen scripts.

This is the time of year when the Skoll Awards for Social Entrepreneurship, the Echoing Green finalists, the Schwab Foundation Entrepreneurs of the Year awards are announced, highlighting those men and women who have combined innovation, resourcefulness and opportunity to transform the lives of people and the planet. Skoll, Schwab and Echoing Green are well known entities in the social entrepreneurship world, and to be recognized by them opens doors to the many types of resources these entrepreneurs so desperately need to continue to magnify their transformational impact.

Between 2000 and 2010, I helped identify and celebrate these individuals, disseminating their achievements and telling their captivating stories. This was an important time in the evolution of what we have come to understand as the practice of entrepreneurship applied to positive social change. When I first heard the term “social entrepreneur,” I thought it referred to entrepreneurs who liked to party. Clearly, we needed role models that could represent what a social entrepreneur was — and what he or she was not. This concept of “heropreneurs,” or entrepreneurs doing social good, was the best way to showcase what was otherwise an elusive notion.

But one of the results of this emphasis on “heropreneurs” was that many of us were seduced into thinking that social entrepreneurs were the Seventh Cavalry that would ride in and save the world where others had failed.

There is no denying that the men and women we have come to designate as “social entrepreneurs” are extraordinary — they have seized opportunities that others saw as too risky, or non-existent, and through a combination of innovation and resourcefulness, managed to create new or better approaches to critical social and environmental problems. And to advance their mission of transformational change, these entrepreneurs have set up their own organizations, some nonprofit, but usually income generating — others for-profit, but not profit maximizing.

Yet, they will be the first to tell you that rather than being super heroes, they are the unreasonable stubborn ones who are deaf to the phrase “it can’t be done.” In pursuing the seemingly impossible, they infect others with the notion that a real opportunity exists to reshape approaches and business models and come up with a new way of tackling an issue where others have given up trying.

However, what we are now beginning to appreciate is that without teams of talented and committed individuals accompanying them and implementing those new approaches, these entrepreneurs, as marvellous as they are, will fall short of achieving their vision.

I now work with graduate students, mostly MBAs, who don’t want to wait until they are 50 years of age to “give back.” They want to apply their business skills and their talents to improving the world — now. The majority of them are not entrepreneurs — yet their know-how is essential to ensuring the successful implementation and scale of an entrepreneur’s vision.

And so I find myself in the odd position of emphasizing that it is okay not to be an entrepreneur. I believe we are evolving to a more realistic appreciation of the role of the entrepreneur and the importance of a supportive team and ecosystem that allows an innovative vision to flourish. As we do, we are moving away from a phase where everyone thinks he or she should be an entrepreneur — and let’s celebrate that, for I truly think we should all go mad if everyone ran around setting up his or her own organization to change the world.

I would like to propose that we begin to differentiate the noun “entrepreneur” from the verb “entrepreneuring.” We may not all be entrepreneurs, but we can certainly all be “entrepreneuring,” whether we work in an 800-year-old university like Oxford, in a publicly listed company, in a small- or medium-sized enterprise, or in a public sector institution.

I like this concept of “entrepreneuring” put forward in a 2009 journal article in the Academy of Management Review by Rindova, Barry and Ketchen. The authors argue that our definitions of entrepreneurship too narrowly focus on value creation via new ventures — whereas the notion of “entrepreneuring” encourages the consideration of a broad set of actions intended not only to create wealth but also to bring about new states in economic, social, institutional and cultural environments.

We need to open up the conversation which has too narrowly focused on a specific, albeit critically important, actor in the economic ecosystem, the entrepreneur, to highlight the reality that there are hundreds of people of all ages out there who are entrepreneuring in all sectors of society, and that together, we form part of a movement that is rethinking business and the role of governments. Social entrepreneurship as an approach rather than a specialized field, is paving the way toward a much larger transformation of capitalism where the creation of positive social change through markets will be the key to success rather than the result of a special kind of business.

Pamela will be SEWF 2013′s closing keynote. Her presentation is entitled “Will You Greet or Great the Future: The Power of Unreasonable People.” 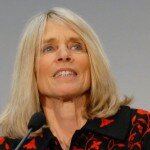 Pamela Hartigan is Executive Director of the Skoll Centre for Social Entrepreneurship at Oxford University’s Said Business School and Founding Partner of Volans launched in 2008 to support innovative scalable solutions to global challenges. From 2000-2008, she was the first Managing Director of the Schwab Foundation for Social Entrepreneurship. She has held leadership positions in multilateral organizations, educational institutions and entrepreneurial ventures, conceptualizing and creating new organizations, departments or programs. A graduate of Georgetown University’s School of Foreign Service, she also holds Masters’ degrees in Economics and Public Health and a Ph.D. in Cognitive Psychology.

Dr. Hartigan is on numerous Boards of entrepreneurial ventures around the world and is a frequent lecturer on social entrepreneurship and innovation at graduate schools of business around the world.  In addition to her position at Oxford, she is an Adjunct Professor at the Columbia Business School. Her latest book, co-authored with John Elkington and published by Harvard University Press, is entitled The Power of Unreasonable People: How Entrepreneurs Create Markets to Change the World.